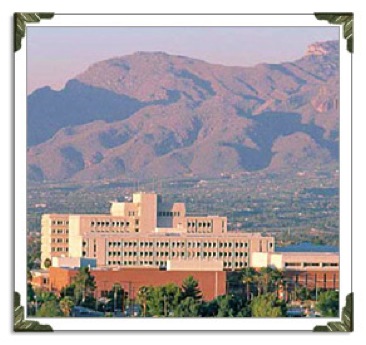 Located in the heart of Tucson, Arizona, Gila Hospital is a 500-bed, not-for-profit hospital that provides a wide range of health, social and support services. Gila Hospital is a nationally recognized center for quality tertiary care, medical education and research. It is a Level I Trauma Center verified by the American College of Surgeons and is also a respected center for maternity care, orthopedics, oncology and many other medical services. Gila Hospital offers both inpatient and outpatient services.

Outpatient rehabilitation services are available for individuals with orthopedic, neurological, cardiopulmonary, or other conditions requiring concentrated therapy for return to a maximum level of function for school, work, home management and leisure/recreational pursuits. Outpatient rehabilitation emphasizes patient and family participation in the therapy process to foster the patient’s independence upon discharge. It is our goal to see patients live successfully without our help.

The clinical staff of experienced professionals includes Physical Therapists, Occupational Therapists, Speech-Language Pathologists, Social Workers, and Certified Rehabilitation Nurses. Prior to the start of treatment, authorization from the patient’s insurance company must be received. The length of treatment and frequency of visits are based on several factors including specific injury/condition, the physician recommendations, surgeon or case manager’s prescription, therapist’s evaluation and recommended treatment plan, and insurance coverage.

Gila Hospital outpatient rehabilitation also has evaluation clinics that include specialized services and/or physician/dental consults in the areas of Audiology and Dentistry.

S:  “It feels good to get away from the house for a bit.  Wow….that homebound status thing is kind of strict.  It makes you feel like a prisoner in your own home.  I thought I was going to lose it.”

O:  OTR/L began eval.  Pt is a 38 yr old married man from Tubac who was injured by an IED while in Afghanistan while working as a photojournalist.  He sustained multiple wounds to the L side of his body and a L side skull fx.  Since then he has experienced some R sided visual neglect, difficulty with visual scanning, R hand edema that seems to have resolved now, executive function problems, difficulty with eating probably due to mouth pain due to multiple injuries and tooth extractions.  He developed infection at the L femur pin sites of the external fixator used to repair multiple fx there.  He is now WBAT.  Has hx of MRSA.  Wife reports that he is easily agitated, possibly depressed, and does not seem to have interest in things that he pursued previously.  She reports he is fixated on the idea that he should be able to drive even though he has a seizure disorder and R upper visual field cut.  She reports he is frustrated with clumsiness and short tempered with the kids.  Wife reports that he knocks things over a lot while he is eating or at the bathroom sink, and when he does, he sometimes falls into a rage or becomes very sullen and starts rehashing all that has happened to him and wondering if they would all be better off without him.  She admits there is much financial strain but his parents and her parents have helped to make the house payment and friends from her church have frequently filled up the car with gas at their own expense.  She feels grateful for the help, but he is mostly embarrassed that they need assistance, and feels guilty that he is not working.

Strength: UE WNL, perhaps slightly weaker on the R hand.
ROM: WNL all joints of both UEs
Endurance: Low, frequently sleeps till noon on days he did not have home health, refusing to join family functions
Cognition:  Wife reports she must verbally prompt him to  shower and dress even though he can physically do it.  She reports that he uses his I phone to keep track of apts.  She fills medicet and his phone is programmed to remind him of meds, but he still misses his Dilantin aprox 1x a week.  Last seizure was aprox 1 month ago.  Wife believes he may have had others that he has failed to report to her and she believes he does this because he wants to drive.
Bathing: with SBA and verbal prompts, using tub transfer bench and grab bars.  Uses shower pick to mouth.
Dressing:  I UE and LE
Grooming:   Wife says pt grew a beard that she hates because he did not want to shave anymore.  She says he often missed patches of growth on the R side of his face even when he did shave.
Mouth Care: pt uses shower pick when reminded.  Pt has electric toothbrush but says it bothers him and hurts his teeth.  Wife complains he has bad breath.
IADL-  Currently unable to drive due to seizures and R field cut.  Would benefit from OT driving eval and so OTR will phone physician to request.
Shopping,  pt tolerates 1 hour in grocery store and can retrieve about 20 items in 1 hour following a list and using grocery cart for support.  Pt has difficulty scanning the shelves and finding the items and sometimes makes mistakes such as buying diet when he wants regular, or low fat when he wants regular.  He had 1 seizure at the store and now refuses to go back there as he says it is too embarrassing since he became incontinent.
Financial: pt prefers that the wife handle that now even though he tracked their investments and used to insist that they live on a budget that he developed prior to his injury.
Spiritual: Pt states he does not have a religion and wishes his wife would stop trying to get him to go to church or leave him with people who try to convert him into a believer.  He does admit he is curious about what happens to a person when they die.  He says he feels enlightened when surrounded by nature and hopes to take a family camping trip soon and show the kids things about the stars and rock formations.
Leisure: Pt has interest in photography, music, camping, guitar, reading to the kids, and possibly starting a garden.  He is hoping to start going to a gym now that he is not on home bound status.
Sexual: Pt and wife say they do not wish to discuss this issue at this time.
Work:  Pt doubts that he will ever be able to work full time as a photographer.  He continues to use his IPHONE to take basic pictures, but says he cannot get the shots to line up right when he attempts to use his old professional equipment.

A:  Pt has made significant progress from a physical standpoint but now needs interventions to increase  endurance, self initiated and organized attention to self care, parenting roles, leisure, and a plan to pursue working if possible.  Pt has signs of possible depression as evidenced by agitation, impaired sleep patterns, feelings of low self worth.  It is unclear how often he is having seizures and that must be determined if he is to pursue getting a driver’s license.  OTR has advised him that he is required to self report his seizure activity to MVD and is not to drive until cleared by his physician and the MVD…typically after at least 3 months of being seizure free.

OT Goals:
1.      Increase endurance to at least 12-16 hours out of bed, involved in activity time per day to simulate normal workday.
2.     Increase consistent compliance with seizure meds and determine actual frequency of seizures via use of www. myseizuretracker.com  or other app.
3.     Increase consistent mouth care after consult with dentist for specific recommendations.
4.     Increase self-initiated showering.  Wife to withdraw verbal prompts and determine if he continues to sustain showering.
5.     Pt will begin one new or resume one old leisure pursuit within physical and cognitive ability within 2 weeks.
6.     Demonstrate increased compensation for R visual field issues by turning head to the right and more consistently using lighthouse techniques.  Pt will report fewer incidents of running into objects on his right and knocking things over while eating.
7.     Pt will begin workouts at gym 2-3x per week.   Arrange for pt to meet with athletic trainer.
8.     Pt will meet with vocational rehab counselor regarding work potential/ticket to work, etc.
9.     Consult with neuro ophthalmologist  re R visual field cut/inattention and potential with regards to driving, photography, leisure, safety.  Since field cut is upper right, he could likely drive once seizures are under control at least 3 months.
10.  Refer to OT driving eval.
11.  Report possible depression to physician. (done today by phone)
12.  Assume one parenting role that involves both leisure and appropriate supervision/discipline with children.  (potentially nature walk, photography or guitar with children after consultation with wife regarding rules that were established by her in his absence).

Chip Jones is a 38-year old man who was well  known to me prior to his current situation. He has been discharged from Acacia Rehabilitation Institute on August 1, 2011 following a series of events beginning on 4/19/11 following blast injuries which occurred while on patrol during a work assignment.  An improvised explosive device exploded near left side of vehicle. Patient sustained blast injuries to left face and ear, left shoulder, left chest, left flank, and a compound left lower extremity fracture.

After being stabilized in local Military hospital in Afghanistan and placed in a medically induced coma he was then transferred to Landstuhl Regional Medical Center in Germany on 4/21/11.

While in Germany, the patient developed pneumonia which resolved; was placed on Vancomycin and rifampin for osteomyelitis; and was placed on Dilantin for a seizure disorder.

Patient was then transferred to Gila Hospital, Tucson, AZ on 6-25-11. Vancomycin, dilantin, and pain medications were continued. An interim, removal partial dental appliance was constructed. Contractures developed in the upper and lower extremities and there was persistent edema of the right hand. He developed dizziness and continued to have tinnitus and intermittent low, grade headaches. A right sided visual defect was noted.

On July 1, 2011 Mr. Jones was transferred to Acacia Rehabilitation Institute for continued rehabilitation. During that time he fell and his cognitive issues became more apparent. He was discharged on August 1, 2011 and is to receive home health care through Cactus Home Health.

PE:
General: well nourished man who is conversant; alert and oriented to person, place, and time. Mild discomfort particularly on movement is noted.

S: Arrives to out-patient department, walking with single-point cane, accompanied by wife. “It is so good to have the fixator off of my leg. I can get around much easier now. I hope to be walking without a cane soon and want to get back to working out at the YMCA near my home.”

Plan: Therapeutic exercise and mobility training 3x/week for 4 weeks. Work with patient on plans for involvement in long-term fitness program.

Chief Complain:
“I want to get my teeth fixed”. Pt also requests pain medication (Percocet) after every dental treatment.

Dental history:
Patient had some extractions and lost teeth and an interim, removal partial was constructed. Broken tooth due to fall.