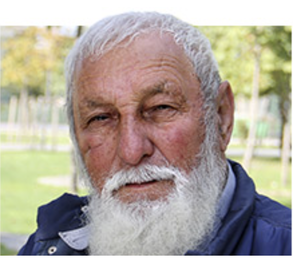 So you’re a nurse, huh? Well I don’t know…usually people are kind of scared to talk to me and the ones who do are either cops or do-gooders. You can call me “Butch” if you want. My full name? Bradley Leonard Sampson. Yaa, most of the time I camp out witha couple of other guys down under the interstate. It’s close to downtown and we all kind of look out for each other—ya’ know—share what we’ve got. I hate to go to the shelter unless it is really cold. Course, I’ve tried a couple of those places the VA is always trying to set up for me, but I either get the boot or just leave… There’s no freedom in a place like that…they tell you when and where you can smoke and you can’t even have a beer. The feeling of freedom…I guess that’s what keeps me moving around.

I came in today about my foot… I’m missing a few toes and now I expect they’ll want to whittle off a hunk more. That’s what you get for being a patriot I suppose. Oh, I’m no hero; just in the wrong place in the’60’s I guess.Ya see, when I got out of high school I enlisted in the Navy. Most of my friends were getting drafted and being sent to Vietnam with the Army or Marines—well, little did I know that the Navy had their own little party going on in Vietnam. Next thing I know, I’m on a patrol boat in the brown water Navy on the Mekong delta—go figure. Anyway seems like some of that Agent Orange stuff they used to spray on the jungle causes diabetes and some bad cancers and stuff. Probably why my toes came off although that really bad cold spell last winter didn’t help any.

I first came here to this downtown clinic with my friend Joe when he got real sick a couple of months ago. I came with Joe in case they tried to pull a fast one on him and stick him in a home or something. Even though Joe ended up inthe hospital for a few days, I think it was for the best. He was coughing pretty bad and we just couldn’t warm him up. Anyway Joe told me today I should let someone look at my foot. Joe says most everyone who works in this clinic is a veteran. Guess that’s why it’s called the Healthcare for Homeless Vets office. Anyways, it’s better for me than going to the VA hospital. That hospital might be nice, but it is a long way from downtown. Too far for me to walk and I’d rather do something else with the bus money when I have some.

I keep to myself. I know most of these other homeless guys in here and sometimes you can get crossways with some of them. I know who I can trust and who I can’t. When things get bad, I just move on.

This week I noticed right there where my big toe came off there was some green pus. It was hard to peel my sock off after it got dry again. Doesn’t hurt really now, but I tried to doctor it a little. Joe had some kind of mouthwash stuff they gave him at the hospital that he was saving for a sore throat. He poured that on so we could get the sock off. Joe’s good about sharing but now I feel like I kind of owe him.

Had to cut a piece out of my boot so I could still get it on. Hated to do that…I need these boots. I can probably wrap a plastic bag around if I need to. Don’t know where I’ll get more socks. Listen, you don’t need to tell anybody about that. I don’t want anyone to think I can’t take care of things myself. I get by just fine and don’t need any do-gooders poking around in my business. Unless you think you could get me a couple pair of socks or something, I’m not asking, but if you hear of something you could leave word for me here at the clinic.