Your team is about to take over the care of Mrs. Millie Larsen who was admitted to hospital 4 days ago. She presented with confusion, dehydration and a  diagnosis of urinary tract infection.

Listen to Millie tell her story 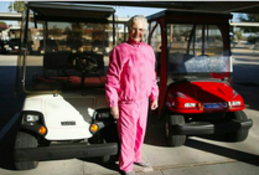 Millie has lived in the same home and neighborhood for 50 years. She has many social connections in the community particularly through her church, where she sings in the choir and volunteers in the church kitchen. She still cooks and tends to her garden and is particularly proud of her rose garden. She has a daughter Dina and three grandchildren who live a good drive away in Queen Creek, Arizona but they visit as often as they can.

Millie has a golf cart that she uses to drive around her community, and if she needs to go further afield she relies on her daughter or friends for help. Until the death of her husband Harold a year ago she was very outgoing and active in the community and was involved in many recreational activities and social groups. It has been a very difficult year for Millie, adjusting to the loss of her husband, to living alone, and trying to manage financially on her own. She is so grateful to have her cat Snuggles for company.

She takes multiple medications and is not sure what many of them are for. She knows some are for hypertension but she is not sure about the others. They keep being prescribed and she keeps taking them, but sometimes she cuts back a little on them because they are so expensive.

She doesn’t want to worry her daughter Dina, so she doesn’t tell her about most of her worries, or about the little stumbles she has been having around the house.

Millie was admitted to hospital four days ago when her daughter stopped by the check on her and found her still in her bathrobe at 5.00pm. The house looked very messy, which was not usual as Millie has always kept things so neat and tidy. Dina was shocked when Millie could not remember her name and so she brought her to the emergency room at Banner Boswell Hospital.

On admittance Millie states: ”My daughter dropped me off and left me here. I’m not quite sure where I am or why I’m here. I feel ok. I can’t believe how my life has changed in the past couple of weeks now. Harold died a couple of weeks, no months ago. I can’t remember. Why can’t I remember? Things have changed. I don’t like that; I’ve always been a strong woman. I feel ok and I take a lot of pills – not sure what they all are you can look on the kitchen counter or ask my daughter what they are. Where is Dina? I haven’t seen her in 6 years; no one ever comes to see me.”

Millie was diagnosed with hypertension, confusion, dehydration, and a urinary tract infection.

She has been in hospital for four days and is excited to be discharged, unfortunately during her hospital stay Millie bumped in to her tray table when she was trying to get to the bathroom and knocked her glasses and her dentures to the floor and both were damaged. She is worried about getting them repaired, if they can be repaired, she needs them both but doesn’t know how she will pay for them.

Dina Clark is the only child of Millie and Harold Larsen. Harold, as well as Dina’s aunts and uncles have passed away, leaving Millie as the last living member of her generation in the area. Millie has lived in their home near Sun City, Arizona since the year that Dina was born. Dina is now 50 years old. The Larsens were one of the first families to live in the area, which is now primarily an active retirement community.

Although she was an only child, she grew up with many cousins on both sides of the family who lived in the west Phoenix area. They are now scattered across the nation due to various careers, although Dina does keep in touch with them. The days of a full house and having many relatives around is a thing of the past, but Dina still has fond memories of the good times they all had together.

Dina was a “Daddy’s girl” and deeply misses her father. The last year has been difficult after the loss of her father and seeing the slow decline of her mother. Dina met her husband, Stephen Clark, when they were in college at the University of Arizona in Tucson. They were married for 21 years. Stephen died 6 years ago from brain cancer. They had three children together.

Jessica is the oldest child. She is now 17 years old, and a senior at Queen Creek High School. Jessica is involved in the orchestra and the National Honor Society. Daniel, their middle child is 14 and just started his freshman year at Queen Creek High School. He plays on a competitive soccer league team based nearby in Gilbert, Arizona and is looking forward to trying out for the high school team. They have three out-of-state tournaments scheduled this year in addition to the many local games and tournaments they are involved in. He struggles most with maintaining his grades, so Dina finds she has to work with him on homework more than the other kids. Megan, the youngest child, is 12 years old. She is an eighth grader at Newell Barney Junior High School. She is also involved in soccer, but decided to stop playing on a competitive team and only plays on the school soccer teams. She was on the 7th grade girls’ soccer team at Newell Barney Junior High School last year.

It was very difficult for the family when they lost their husband/father, Stephen. Before his passing, Dina had found great comfort in the role her father Harold took in being a male role model for her children, particularly Daniel. He was 8 years old when Stephen died and grieved for a long time afterwards. Dina worries about Daniel as he is moving into his teenage years and now lacks the support of a close male role model in the family. Stephen’s family lives in New Mexico and Colorado, so they only see each other once a year at the annual Clark family reunion. She is reluctant to move from Queen Creek as her children have all been born and raised in the area. They have childhood friends and she would like to see them graduate with them just as she was able to do.

Dina works at Queen Creek High School as a history teacher. She is a bit concerned about her future as this year the school is piloting a program in which some of the high school students take history as a self-paced, online course. She is concerned about what impact this may have on the future of history teachers in the K-12 school system. It seems that with all the financial hardships the schools are having, that they may find it more cost effective to teach history using the online format. She had taken a fair amount of time off when her husband was sick and while assisting with her father last year. She is concerned about taking more time off to care for her mother. She states: “If my classes can be taught online, and I take too much time off, they may find that they do not need me anymore as a teacher. I like working at the high school as I have always been able to be there for my kids in the afternoons. Next year I will have my last two kids in high school. I do not want to get a position at the junior high school which ends later in the day than the high school. I would not be able to be there for my kids like I have been able to, if I were to switch schools”.

This last year has been tough where her mother is concerned as well. Dina has seen her mother struggling with the loss of her father’s pension income and worries about her not having enough money to meet her needs. She and her mom talk by phone just about every night. Even though driving to and from Sun City from Queen Creek is a three to four hour round trip, Dina makes it a point to pick up Millie once a week to have dinner and see the grandkids. She has also found that her mom needs more help with groceries and has also taken it upon herself to pick up extra groceries and take them to her. Sun City is seven miles long and three miles wide with “everything an active retiree needs in between”. Resources in Sun City include more than 120 clubs, eight golf courses, seven recreation centers, two bowling centers, and the entire Valley of the Sun.

Conceived as an entire community dedicated to leisure and recreation for the active retired adult, Sun City was opened January 1, 1960. Until establishment of Sun City, retirees were expected to retreat from life—literally, to retire from it. The notion that retirees would pull up roots, move to a vacation spot, buy a stylish new home, and surround themselves with fun and pleasure in a community of like-minded people was definitely not the norm.

Architecturally, Sun City, Arizona is known for its unique character, personality, and legacy. Parks and trails, recreation centers and golf courses, an open-air amphitheater serve as centers for fun; the community is host to a number of arts festivals, neighborhood parties, musical concerts, and special events. ASU West, Lifelong Learning Club, multiple community colleges, and RISE: Rio Institute for Senior Education are all nearby.

Sun City has wide-open streets for maximum accessibility; licensed golf carts roam freely and many Sun City residents own and use their golf carts as their transportation around the community – including for health care visits. Within the borders of Sun City AZ there are numerous medical doctors, dentists, eye, hearing and other specialists, and a top-rated medical center.

Located in the middle of Sun City AZ is the Banner Boswell Medical Center. More than 700 physicians provide a full spectrum of medical services. Banner Boswell is a designated NICHE hospital through the Hartford Institute for Geriatric Nursing. The NICHE (Nurses Improving Care for Health System Elders) designation means that Banner Boswell has met the criteria for providing optimal care to the geriatric population. Banner Boswell is a nationally-certified Joint Commission Primary Stroke Center, and a Community Hospital Comprehensive Cancer Program. Through the Banner Sun Health Research Institute, patients have access to world-class research, medical experts, and clinical trials without ever leaving Sun City AZ.

For emergencies, the 911 call system dispatches Sun City Fire Department paramedics. Many homes have lock boxes with a key inside that only the Sun City Fire Department can open to gain access to locked doors. Volunteers at Banner Boswell Medical Center assist residents in assembling a Vial of Life. Participating residents have a red sticker on their door or window indicating that they have prepared and documented their medical history, current medications, any allergies, primary care physician, etc., and stored it in a prescription bottle in their refrigerator.